Mass and Count Nouns - brought to you by Meijer

This is one of two themed billboards that has been peppering Michigan expressways this spring.

The other looks almost identical, save for the final noun phrase which replaces fewer stops with less run-around.

I don't think it is any coincidence that the two separate billboards always seem to appear within a few miles of each other. Meijer's advertising agency copywriters certainly know the difference between mass and count nouns. Funny thing is, I am not a frequent Meijer shopper, so I can't recall whether their check-out lanes are labeled X number items or less, or X number items or fewer.

The Wall Street Journal recently published an article by Barry Newman titled Theres a Question Mark Hanging Over the Apostrophes Future. My aunt sent me an email copy of the article as she knew I would enjoy it. And I did enjoy the article; however, my favorite part of the email was her subject line which read: Apostroph'. Thanks for creatively amusing me. I am also still chuckling over the intentionally humorous aspect of the title.* 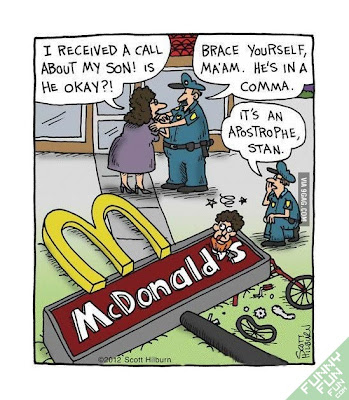 * In case anyone didn't notice, there are missing apostrophes.

Comic via Funny-Fun-Fun by Scott Hilburn.
Posted by Laura Payne at 8:05 AM 4 comments

Who would have ever thunk that a linguist would be among the characters of a rural reality show? Not me, that's for sure. So imagine my surprise when Duck Dynasty's Phil Robertson gave Katie Couric a lesson in articulatory phonetics during the Rural Reality Showdown: Duck Dynasty vs. Swamp People.

Here is a clip from the show that features this lesson.

I have never watched Duck Dynasty, Swamp People or Katie Couric, so I was glad I paid partial attention as my son watched the show. He is a Duck Dynasty fan and I am tempted to buy him a duck call now that I know it can be used as a tool for teaching articulatory phonetics.
Posted by Laura Payne at 7:56 AM 0 comments

This humorous image reminded me of the recent post, 6 Cartons of Anaphora. 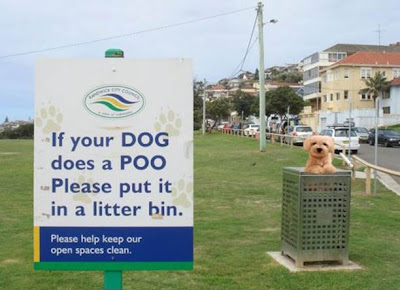 In this instance, the pronoun it is meant to refer to the noun poo, the semantically logical antecedent. Syntactically, it is also more logical to start the process of anaphora resolution by looking to the noun phrase in the sentence which is closest to the pronoun.

Note: I received the above image in an email and was unable to determine where it originated as it has made its way all around the internet.
Posted by Laura Payne at 12:27 PM 0 comments

I don't know about you, but the above attempts at creating gender-neutral, singular pronouns give me the heebee jeebees. 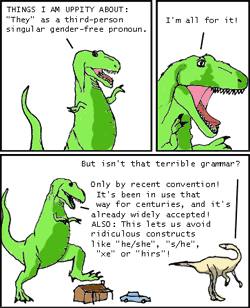 Here are some more of the ridiculous constructs:
. 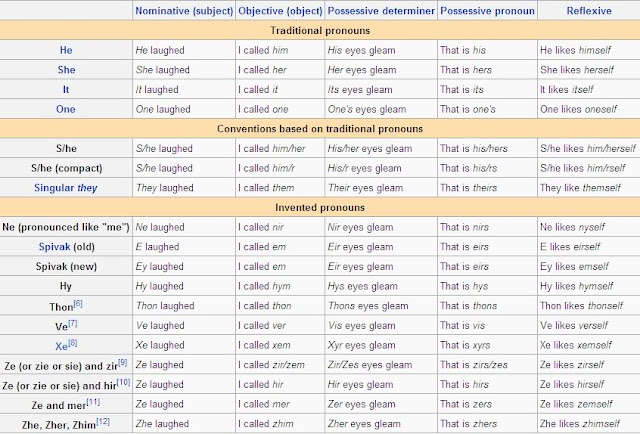 Ann Curzan, an English professor at the University of Michigan, recently wrote about the subject of singular they at Lingua Franca. Here are some excerpts from her post:

"I tell students that they are welcome to use singular they in writing for my class, but they should footnote it the first time they use it and in the footnote explain their rationale for using singular they."

"This footnote accomplishes at least three things: It shows readers that the author is consciously making a choice to use singular they; it informs readers about legitimate reasons for using singular they, even if they disagree with its use in this context; and most importantly, it asks students to be careful, self-conscious writers, reflecting on and explaining their choices in their writing."

Curzan's approach to singular they is commendable. Please pass it on.

The Sound and the Shapey - Conclusion

The results of the poll from the post, The Sound and the Shapey -
The blue shape is a kiki and the green shape is a bouba. 91.8%

The overall results of both polls in the previously mentioned posts illustrate what is called the Bouba-Kiki Effect; that is, the mapping of certain shapes with certain speech sounds is not an arbitrary one.

Jessica Love at The American Scholar explains that, "across multiple studies, with participants from different cultures, boubas (and other words formed with the so-called 'rounded' vowels in boo or bow) are linked to smooth, curvaceous objects, while kikis (and similar words) are associated with jagged angles and objects sharp to the touch."

The Bouba-Kiki Effect is sometimes considered a form of synesthesia, which is defined by Merriam-Webster as follows:

1 : a concomitant sensation; especially : a subjective sensation or image of a sense (as of color) other than the one (as of sound) being stimulated 2 : the condition marked by the experience of such sensations

Comments from the previous posts.

From idiomatico: "Sounds in which you have to round yours lips ("b") suggest rounded forms in any language. It's something that I smell."

- I love the way he extended the synesthesia aspect.

From Marcelo García Facal:  "There has been much literature about the effect of "defaults", meaning, how the fact that the option "The blue shape is a kiki and the green shape is a bouba." is chosen by default has an effect on the choice respondents finally make."


- This is the reason I posted a different version of the poll in The Sound and the Shapey 2.
Interestingly, the results were still very similar.
Posted by Laura Payne at 6:55 AM 2 comments

I couldn't resist throwing a bit of alliteration into the title for the added wordplay effect.

Thank you, Steve, for bringing this comic to my attention.


Thank you to 22 Words for bringing this video to my attention.
Posted by Laura Payne at 9:32 AM 0 comments

Laura Payne
I have a BA in Journalism and an MA in Linguistics.